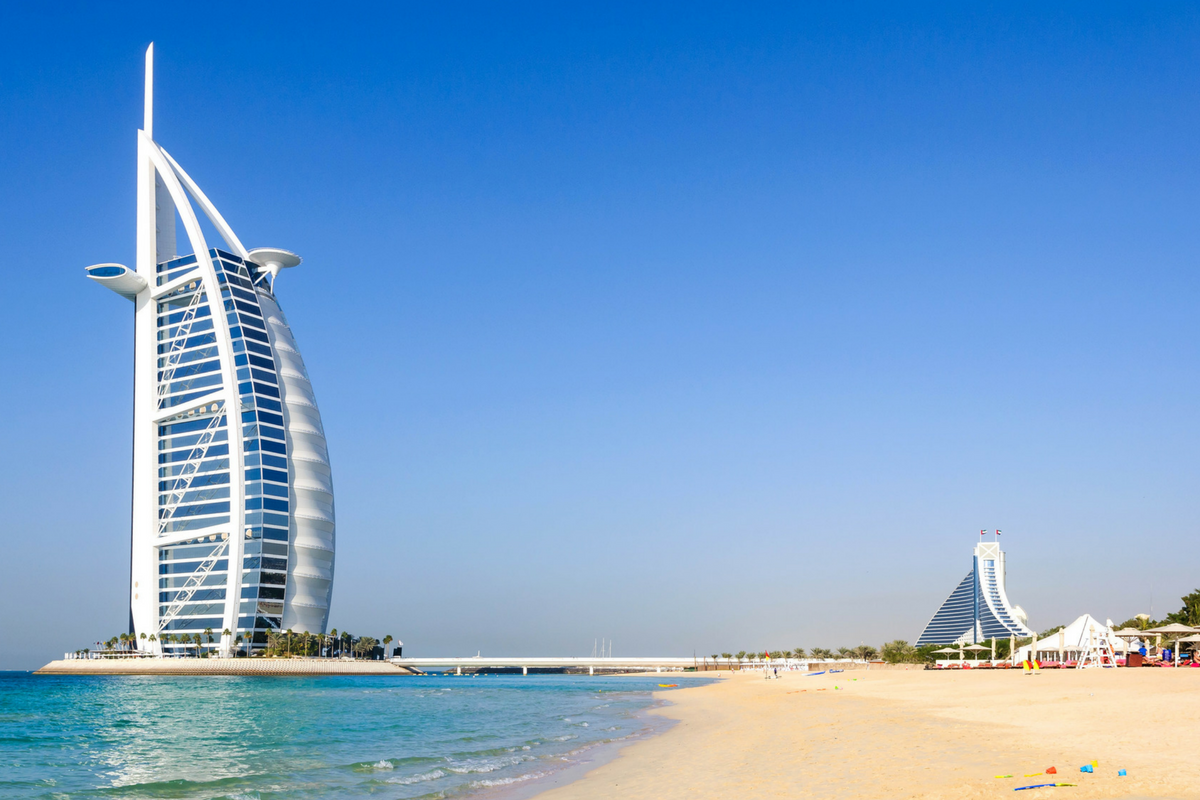 If you would like to visit the Arabian Peninsula, I highly recommend you go to the United Arab Emirates. It is one of the most captivating places in the region. Today we will talk about what makes it so unique. I will make sure to give you a glimpse into some of the hidden gems of this incredible state!

Let’s start at the beginning. The United Arab Emirates is a federal absolute monarchy in Western Asia. It borders Oman and Saudi Arabia by land, as well as Qatar and Iran by sea. Currently, over 9 million people call it their home. It is worth mentioning, that only around 1.5 million of them are, in fact, Emirati. The rest of them are expatriates.

The name of the country is a result of it being a federation of seven emirates. Those are the Abu Dhabi, Dubai, Ajman, Fujairah, Sharjah, Umm al-Quwain and Ras al-Khaimah.

The capital of UAE is Abu Dhabi, however, its largest city is Dubai. Both are known for their skyscrapers and futuristic landscapes.

The official religion of UAE is Islam, while its official language is Arabic. It is a very rich country due to its oil reserves being the 7th largest in the world.

As I have already mentioned, only a small part of the country’s population is Emirati. The country’s net migration rate is, in fact, the highest in the World. And that is not the only record the UAE hold. This country is famous for breaking the records. And it is doing that in more than just one category. Starting from, of course, the architecture. It is no secret that Dubai is the home of the World’s tallest building -Burj Khalifa. That, on the other hand, enables plenty other records such as the Highest BASE jump from a building and the creation of the world’s highest observation deck. Dubai is also the home to the tallest hotel and the tallest residential building on Earth.

But UAE owns many other records. Art-wise it hosted the largest water projection light show and largest fireworks display, it is the home to the longest painting and longest graffiti scroll. And let’s not forget about my personal favourite – World’s tallest chocolate sculpture. It is worth to see this fascinating country for this reason only!

When talking about the United Arab Emirates it is impossible not to mention its capital – Abu Dhabi. The city lies on a T-shape island on the Persian Gulf. It is the perfect combination of skyscrapers and historical sites. The Yas Island or the many futuristic buildings are a true treat for the modern-style enthusiasts. On the other hand, the Sheikh Zayed Grand Mosque or Al-Hosn Fort (the oldest building in the city) will be ideal for those who enjoy different styles.

On top of the architecture, the city has plenty of attractions to entertain both locals and visitors. Gorgeous beaches and many theme parks will keep you busy and oh so happy. And if you are a cars enthusiast make sure you visit the Ferrari World. You will not be disappointed!

On top of it, all the Emirate of Abu Dhabi has some fantastic places for relaxation. One of the most popular is the Liwa Oasis, famous for its sand dunes.

The largest city of the UAE is also its most popular tourist destination. And no wonder. It is, actually, the place where most of the record-breaking buildings and art pieces are. Starting from the famous Burj Al Arab – the only 7-star hotel in the world, of course. But that is just a cherry on top.

The shopping lovers can spend hours inside the Dubai Mall – the largest in the World by area. And if you do not like shopping but are forced to go inside? Do not worry! There are hundreds of attractions waiting for you inside. One of them is the Dubai Aquarium which is – you guessed it – the largest suspended aquarium in the world.

When you are done with your shopping you can head to the Dubai Marina (of course, the largest man-made marina on Earth). There, you can sit in one of the many cafes and bars or simply have a long walk, admiring all of the boats and yachts you’ll see on the way.

Speaking of man-made and records – you have to see the Palm Islands. Those are the largest artificial islands in the world. And they truly are impressive, adding over 500 km to the city’s coastline. They are so big, in fact, that they are among a few places created by man that can be seen from space!

Another amazing man-made creation is the World Islands. The name is fairly self-explanatory. These 300 man-made islands together form a shape of a world map. While you can’t really see it from the sea level, it is visible from the Burj Khalifa.

All of that sounds amazing, doesn’t it? And it is just a piece of what you can experience in this crazy, wonderful city!

One of the places that often get overlooked but should be given more credit is the Emirate of Ajman. The smallest of the seven emirates is the perfect place for a weekend getaway. Especially if you are staying in Dubai, which is just 10 km away.

One of the best places to visit when in Ajman is its museum. Once a fortress, now it showcases how the life looked like in the area centuries ago. It is a true gem for the archaeology-geeks.

Despite it being the smallest emirate, Ajman still owns a record. This time for the world’s largest dhow-building centre. The Dhow Yard is one of its most popular attractions. On top of that its coastline has some of the prettiest beaches in whole UAE.

One of our favourite hotels in the country also lies in this area of the state. The Ajman Hotel with its 168 rooms and 14 suites in modern Arabic décor is the perfect place for a weekend getaway.

Another one of my favourite destinations in the UAE is the city of Sharjah. The third largest city in the country is truly a must-see.

First place on your list should be the Sharjah Museum of Islamic Civilization. It is the perfect location to learn more about the Islamic culture and art. It will give you a better understanding of the land you are visiting and appreciation for its many wonders.

Speaking of art, make sure you head down to the Rain Room. The Random International’s installation recently opened in Sharjah. It gives the visitors a chance to walk through rain without getting wet. It is a fascinating combination of art and science that will leave you speechless.

And don’t forget to go to the Al Majaz Waterfront. Located in the heart of the city it is the ideal location for some leisure time. It offers both beautiful landscapes and amazing architecture into one perfect mix. Among its most popular attractions is the Sharjah Musical Fountain as well as a gorgeous mosque, the Maraya Art Park and many more.

The United Arab Emirates are an amazing land, full of futuristic cities contrastic with old Islamic influences. It is surely worth visiting. Trust me, you will not be disappointed!