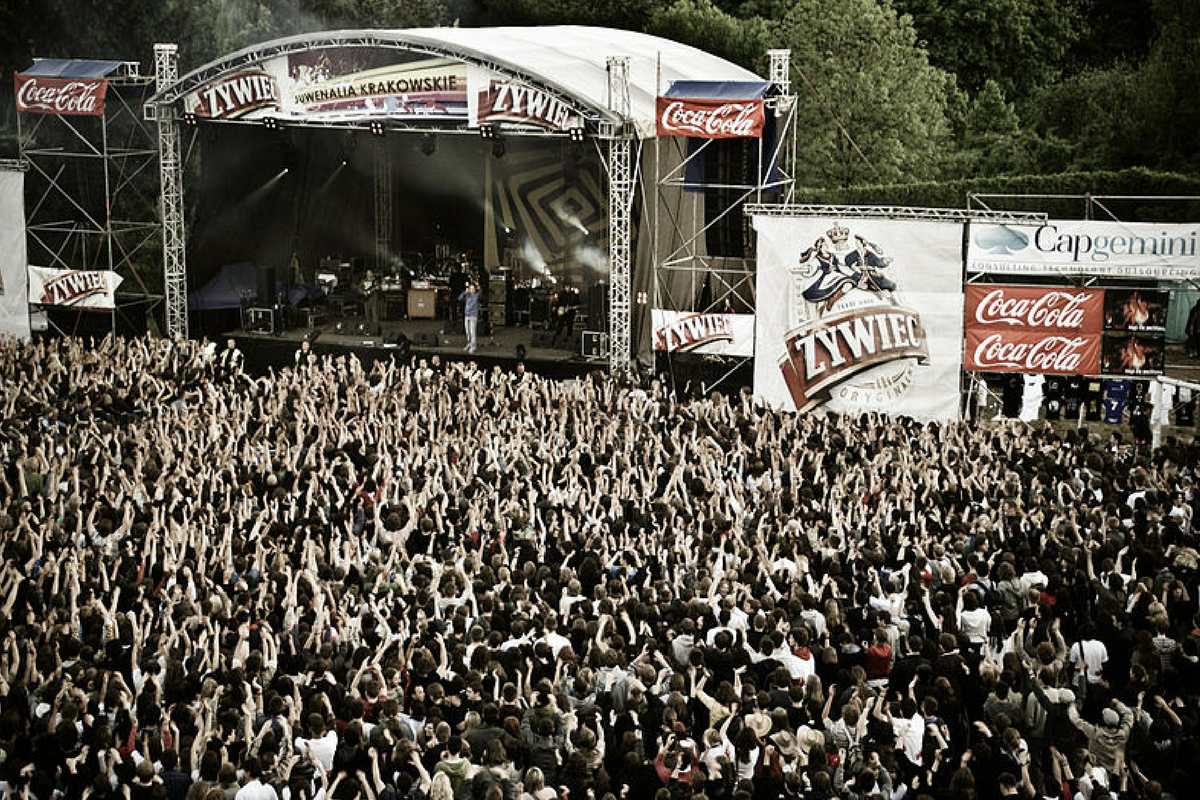 In Poland, there is one month that for every student in this country means the same. For Polish universities, the month of May is the time of fun, music and concerts. All of these activities are collected together and bound into a festival. Welcome to your guide to Polish student festival – Juwenalia.

Juwenalia is a festival organised for students of Polish universities. Most of the universities in Poland’s biggest cities have their own version of Juwenalia. What do they look like? You could say that they are like a typical music festival – there are tickets (with special discounts for people coming from the organiser’s University), dining areas and, of course, the horrible time of waiting for line-ups announcements. Very often most of the tickets sell out even before the university announces the main stars. That alone tells you how much people await and love this festival. It is the time of the students, who gladly take the last official leap in the fun world before having to start studying for the summer exam session.

The name “Juwenalia” was already in use in the 15th century – that is when Krakow has had its first students’ holiday. Then, it started spreading to other cities and becoming more and more recognizable. Since many years, the holiday has also included the presidents of the cities giving the students keys to the city. That meant that this is their time, the city is theirs. Right now, this ritual is preceded by the big parade, where students dress up and dance while walking to the centre part of the city to collect the keys. The moment when students’ representatives get the keys is always the marking point for the official beginning of the festival. Right there, the celebrations begin.

The characteristic thing about Juwenalia is the fact that it is organised mainly by students. Each university has a student organization that is responsible for everything from talking to the artists’ managers, through making deals with potential sponsors until being the people of contact for the performers. Usually, Juwenalia doesn’t only mean concerts, many universities organize also different events, for example, movie screenings, club parties, department games and many many more. Each city makes sure that no matter what kind of fun you are into, you will be able to find something for yourself. The organisations most often start talking about the following year’s Juwenalia shortly after the previous ones have finished. Because each university spends so much time on it and gets funding from both university and the city council, the events always turn out great.

As Juwenalia are usually organised by one or two universities, there are always many differences between each event. For example, Juwenalia organised by art schools or acting schools usually focus more on the, well, artistic side. When you choose this as your place for a party, you can expect fire shows, theatre performances, art exhibitions, movie screenings, etc. Another difference might be the program. Let’s look at Krakow for an example. Juwenalia organised by AGH (University of Science and Technology) are almost a week long and consist mainly of parties and concerts. On the other side of the spectrum is UEK (University of Economics). They organise one main concert. Before that, there is a series of different events – Movie Night, Department Games, the Nicest Student election, etc. Each university has their way of organising Juwenalia and the differences allow everyone to find something for themselves.

Since Juwenalia always takes over at least the part of the city and are sort of a national event, the lineups for the concerts have to be impressive for the people. Most of the concerts gather the biggest stars of Polish music stage, like Lady Pank, Happysad, LaoChe, etc. However, some universities, for example UEK (Cracovian University of Economics), organise concerts with the main star being a worldwide known artist. Examples? Last year, the main star of the Juwenalia concert was an EDM artist, Lost Frequencies. The genres of music are always very different, from rap, through rock and reggae to pop and EDM. When it comes to sponsors, Juwenalia always manages to get the most popular beer producers and often – one of the country’s biggest radio stations.

That shows how big and important this event is, especially for students. Whether you are a student or you are older and want to listen to some good music, go ahead! The event is available for everyone who is interested in it. It’s the time to let go, have fun and enjoy life.

Do you have your tickets for Juwenalia? Or maybe are thinking about visiting one of the cities that organizes it? If so, click here to let us help you with finding your place to stay.