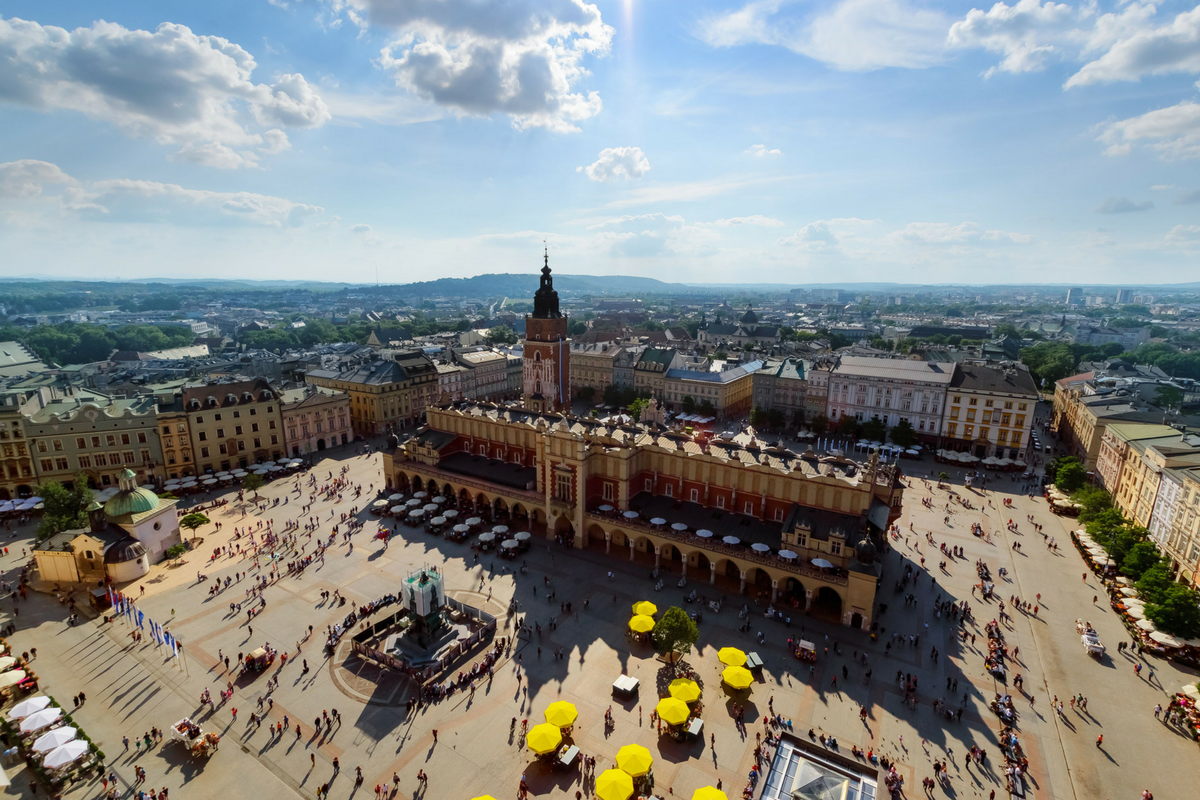 Recently, we expanded our team, which led to a need for a bigger office. We moved part of our team to a new wing of the same building, but this time with a very special view. We can now admire the Main Square of Krakow from our windows. It is truly a spectacular view and a very special place in Europe. That’s why today, we’ve decided to introduce you to this gorgeous place.

A Little Bit of History

The Market Square of Krakow (Rynek Główny) has been laid out when the city itself was established in 1257. It came to life as a work of the city’s mayors, under the rule of a Polish King, Bolesław V the Chaste. It was actually the King’s property until it was gifted to the city itself in 1358.

Its main purpose was being a place where the merchants could sell their goods. It was divided into parts, each dedicated to a different good. There was a salt market, coal market, lead market and more.

It soon also became an administrative area. Many trials and executions took place on the Square. Most importantly it was a place of many important historical events in the Polish history.

The Market lies at the junction of 11 streets. It has a very regular, nearly perfectly square shape. It was only slightly adjusted to the previously existing buildings and roads. Each of its sides is 200 metres long, making it the biggest medieval main square in Europe.

East from it is the Small Square. It was an auxiliary market, mostly used by the butchers. It is not only smaller but also not as symmetrical. And although undeniably lovely, it is not as impressive as the Main Market.

The King’s Road goes through the square from the Florian Gate, all the way to the Wawel Castle, creating the perfect trail for all the history lovers.

The most popular building amongst many wonderful sites on Rynek Główny is the St. Mary’s Basilica. Apart from the Wawel Cathedral, it is the most important sacral building in the city. 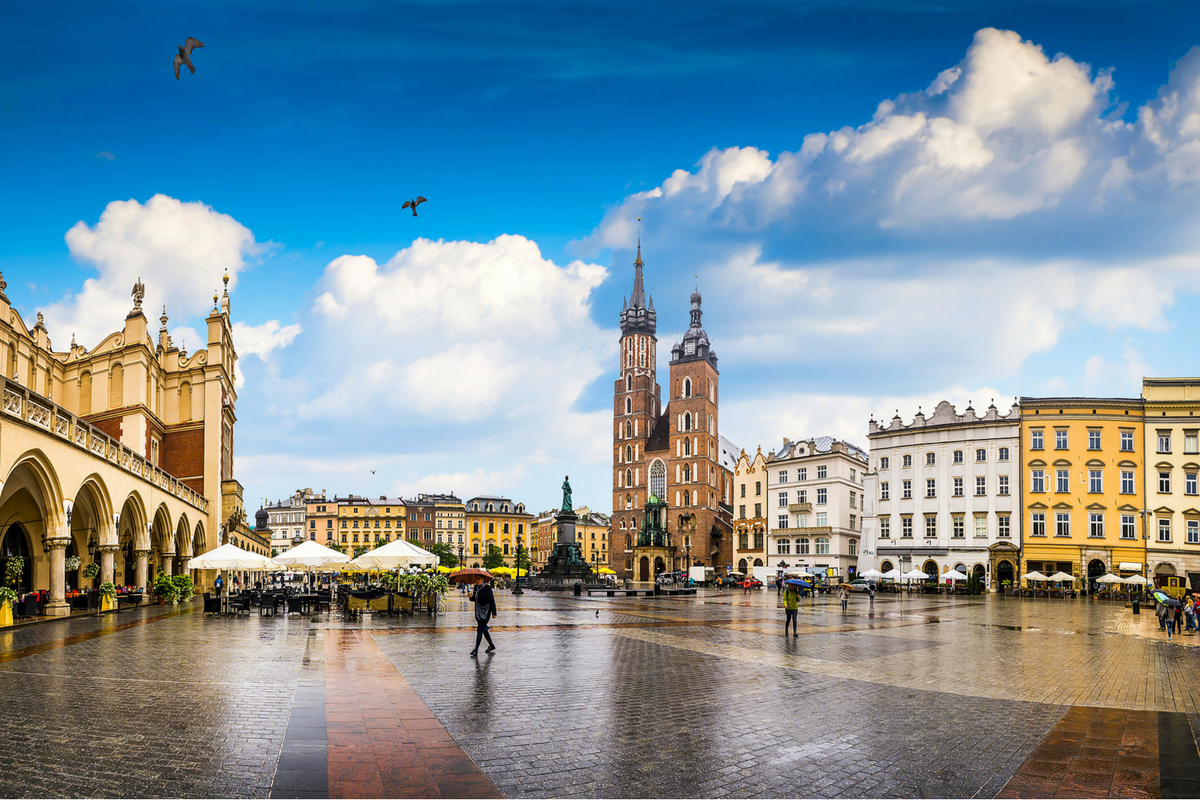 It was erected at the end of the 13th century on the foundations of a Romanesque church. Over its long life, the church was rebuilt several times to create what we can admire today. The most important changes were the creation of the main altar by Veit Stoss, which is now considered a masterpiece of late Gothic sculpture, as well as the development of the stunning northern tower.

At the end of the 19th century, the inside of the Basilica was decorated with the paintings designed by Jan Matejko. The vault was meant to imitate a starry sky, and the walls got covered with various ornaments.

When you’re by the Basilica at a full hour you will hear a trumpet playing. This five-note Trumpet Call is played each hour by two firefighters. They play the melody in each of the four directions of the World, so each of them plays the same sound 48 times per day, so if you’re lucky you’ll get a glimpse one of them. The legend says that once when the enemy army tried to attack Krakow, a trumpeter played to alarm the city. The people of the city managed to close the gates, but one arrow reached and killed him. That’s why today the sound is abruptly finished.

The Old and the New

There are many more historical buildings located either on the Square or in its surroundings. The small and seemingly very modest Church of St. Wojciech is actually one of the oldest stone churches in the country. The Town Hall Tower is the only remaining part of the old Town Hall, taken down in the XIXth century. Even the tenant houses surrounding Rynek Główny are pieces of history, some dating back to the middle ages. 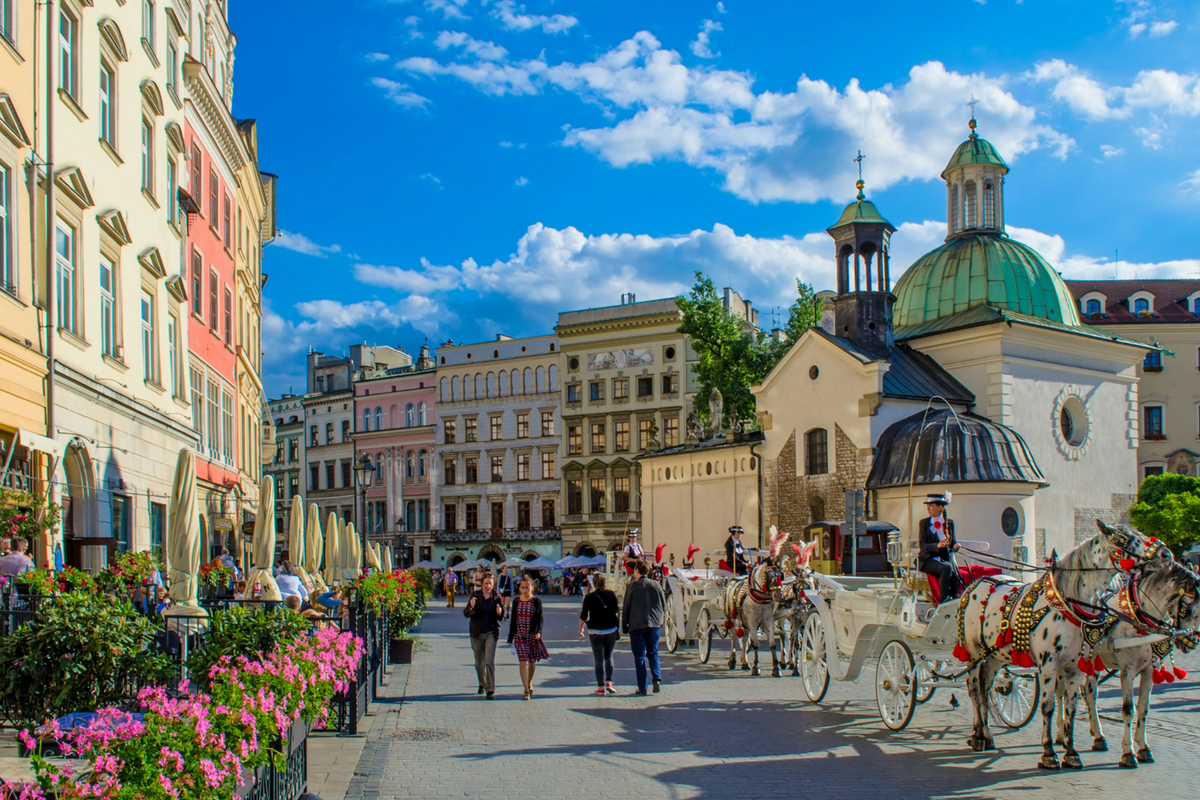 Located in the centre of the Main Square, the Cloth Hall is one of the most popular landmarks in Krakow. Its beginning goes all the way back to the location of Krakow and creation of the Main Market. While the original Hall was almost entirely burnt down, its parts are still visible today, and the now existing building is probably even more impressive than the one before.

It was created mostly as a place of trade for the inhabitants of the city. And while it still serves as a location of souvenir shops, it is mostly a monument, full of tourists at all times.

But there are also modern components that make it as gorgeous as it is. By the Town Hall Tower lies a unique sculpture. It is a giant human head. The sculpture under the name of Eros Bendato was a gift to the city from Igor Mitoraj. It appeared on the square in 2005 and today it is hard to imagine it without this curious creation.

The Center of the City’s Life

The Krakow’s Main Square has always been a centre of the city life. The Adam Mickiewicz statue is the reference point and a popular meeting spot for the people of all ages. It is here when many loves blossomed and many amazing stories started. 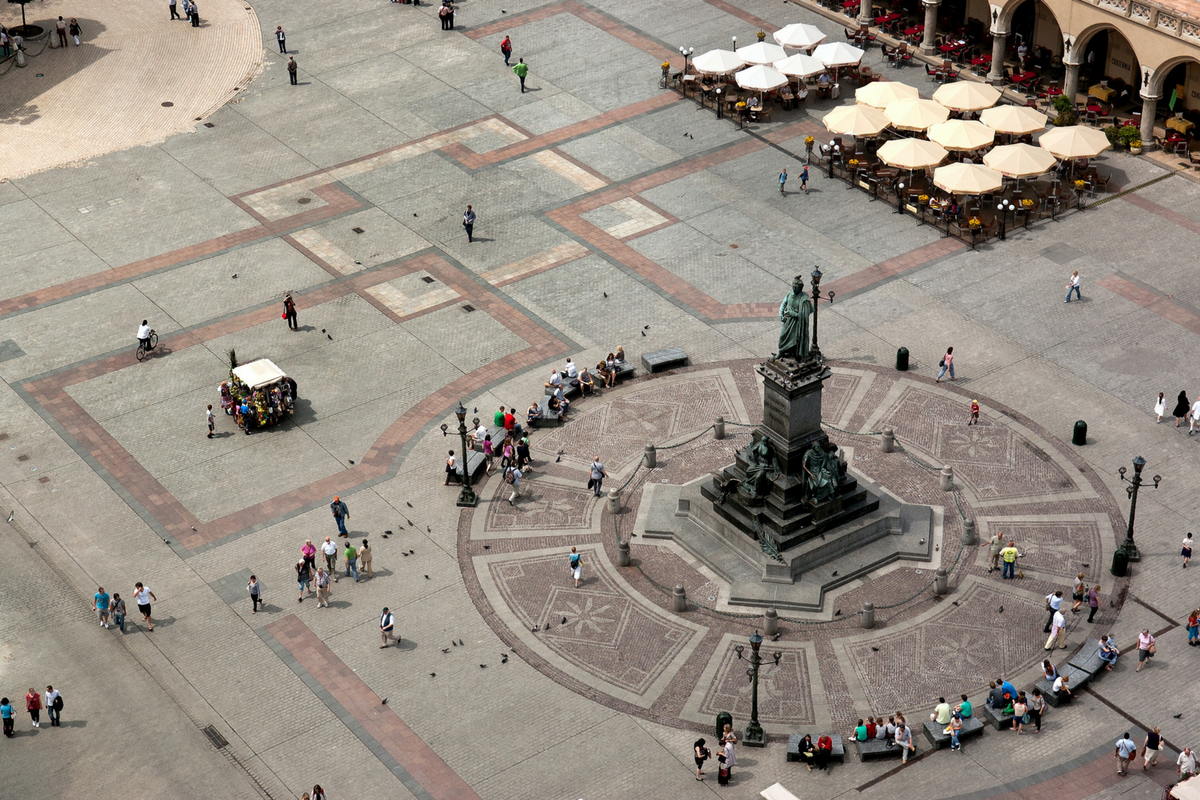 Of course, many inhabitants of the city choose to escape from it during their spare time. But if they stay, they often opt for a walk through those old, yet beautiful streets as a way of relaxing. The Square is so popular that it often gets pretty crowded. However, thanks to the height of the buildings located there it is still quite a view, no matter the number of tourists. Anyone who’s even been to Krakow must admit, that there is nothing quite like it. And the way the light illuminates it at night, makes it seem as if there are two of the Main Squares, one during the day, and one when the sun sets.

Where the Entertainment Is

Apart from being a casual meeting point, the Square is also a place of many events. First of all, there are almost always performing artists playing guitars, saxophones or breakdancing on the square. There are also many flash mobs taking place here.

A truly unique event in Krakow is the New Year’s Eve. That’s when a large scene is set up by the Cloth Hall and thousands of people gather to listen to their favourite artists and watch a firework display when the clock strikes midnight. We don’t necessarily recommend it though because the crowd can get overwhelming and it gets difficult to truly enjoy what you see. But if you find a nice spot right outside of the square you can still hear the music and admire the fireworks without feeling like a sardine in a can.

But apart from those happenings, there are also many big events taking place there. Concerts and exhibitions take place all through the year. What truly lights up the atmosphere, though, are the holiday fairs. During Easter and Christmas small huts can be seen all around the place, with dozens of typical foods, drinks and souvenirs at a display. 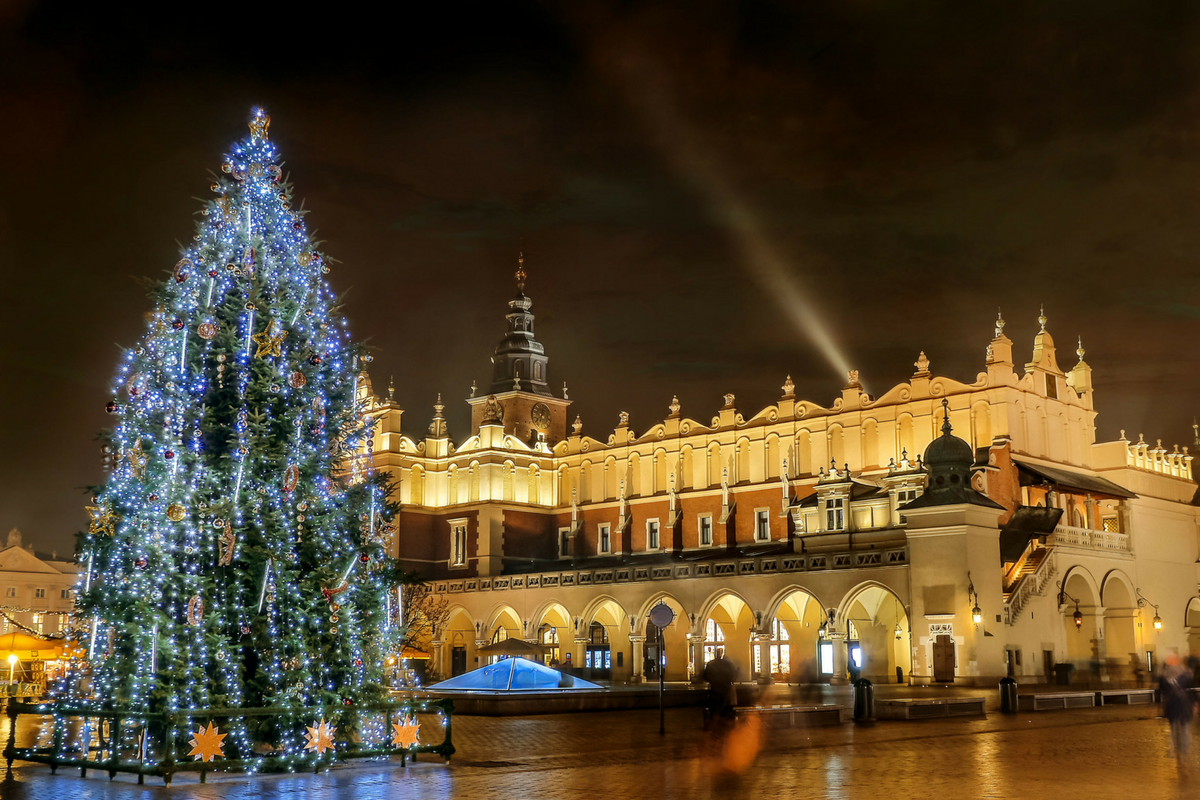 And trust us, there’s nothing quite like going to the Christmas Market at night. When the square lights up, you can smell all the delicious food and have a glass of mulled wine, you truly feel like a part of something special.

All that makes the Main Square of Krakow truly extraordinary. No matter how many times you wander around it, whether during the day or night, it will never cease to amaze you. We know, we surely can’t get enough of it.