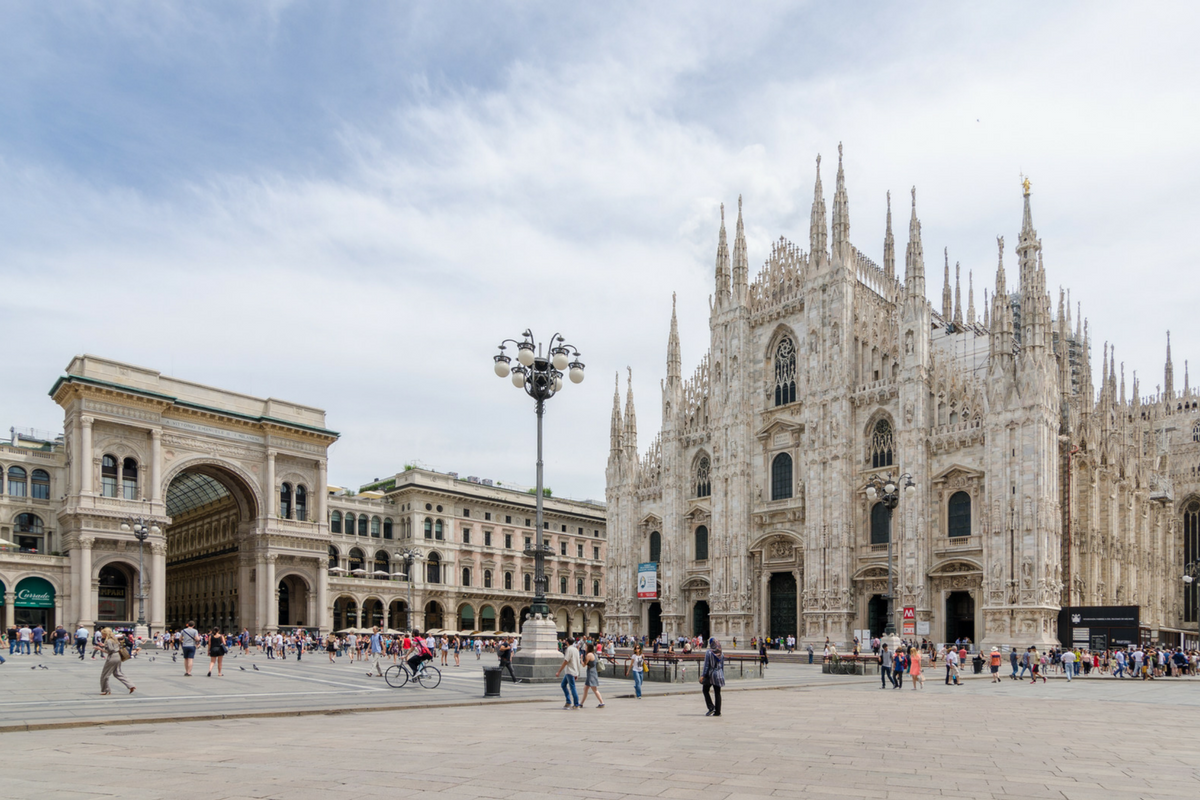 Second most populous city in Italy, home to one of the most popular Leonardo da Vinci’s works of art. A place that is a capital of art, fashion, food and business altogether. This combination can only mean one thing – Milan. Today, let’s take a closer look at the central city of Lombardy.

The history of the city is interesting. It was the Celtics who have founded a village that grew and developed into the amazing city we know now. Around the year 200 BC, the Romans took over the ruling in the Mediolanum, as they used to call it. Then, the city became a capital of the western part of the Roman Empire. Milan was the place where Emperor Constantine issued the Edict of Milan which made every religion legal in the empire. During the Middle Ages, the city was under the rule of barbarians and Germans. Later, it was the city the kingdoms fought for and either ruled it or let it be independent. Milan became a part of Italy in the year 1861. Since then it has survived two wars and undergone a series of developments to become the capital we know today.

There are quite many places to see when you’re visiting this beautiful part of Italy. None of them, however, is a mural made by one of the most famous and talented artists in the whole history of our world. “The Last Supper” is a fresco, created by Leonardo da Vinci in the 15th century. However, being made with the usage of the techniques that Leonardo did, the artwork is not in the best shape now. Even though many people worked hard to repair it, the painting has visible marks of time which are impossible to erase. You can find Leonardo da Vinci’s masterpiece in the Santa Maria Delle Grazie Convent and remember to buy a ticket, without it you will not be able to enter and see the artwork.

We cannot talk about Milan and not mention Duomo Cathedral. This beautiful piece of architecture is one of the city’s symbols. Considering the fact that St. Peter’s Basilica is located in the Vatican, Duomo Cathedral is the largest church in Italy and the third largest church in the world. Milan Cathedral, as people also call it, is not only the touristic gem but it is also the seat of the Archbishop of Milan. When it comes to history, the construction of the cathedral began in the 14th century and had continued until the 20th century with the last figures put on the facade in the 60’s. The amount of work put into this cathedral is the best reason itself to see the Duomo.

If you are a fan of the luxurious brands like Louis Vuitton, Chanel or Prada, this place should definitely be on your bucket list. It is the world’s oldest actively working shopping mall and has a name after Victor Emmanuel II – Kingdom of Italy’s first ever king. This wonder of a building is located very close to the Duomo cathedral, next to it actually. People call the gallery “Milan’s drawing room”, as it is one of the most important spots for meetings and dinners. If shops and restaurants aren’t the things of your interest, you should see the gallery simply because of its architecture. Glass dome, beautiful interior – that gem of a landmark is something you cannot miss while visiting the city.

This public museum of Milan has one of the biggest collections of art in Italy. Pinacoteca di Brera has originally been an Observatory and a grand Library founded by the Jesuits. However, it has undergone some changes through the ages. Starting from being a palace, then transforming into an academy, to finally become an art gallery. After reaching the last stage it quickly became an important place on Italy’s map of art education. The amount of different, breathtaking artworks that this public museum has to offer is quite surprising for people. Not without the reason, it is one of the biggest and most known art museums in the country. Whether you are a fan or not, this place is definitely worth visiting.

Originally built in the 13th century, then rebuild and redecorated in the 15th century, the Sforza Castle is another thing worth seeing in Milan. It was a Visconti lord in Milan who ordered the original construction in the middle of 13th century. At that time, the castle was known as Castello di Porta Giova. In the first half of the 15th century, the Golden Ambrosian Republic destroyed the castle after ousting the Visconti family. Then, at the very end of 15th century, Francesco Sforza became the lord of Milan and he ordered the immediate start of castle’s repairs and redecoration. Many artists were taking part in it, including Leonardo da Vinci, who personally painted frescos in a couple of rooms. Right now, the castle is a home to a couple of art museums, which we all recommend from the bottom of our hearts.

Of course, we cannot forget about this aspect of Milan. Whether you would like to have a dinner, lunch, breakfast or aperitivo, Milan is the best place for all of it. If you want a drink and a light snack, you can see that between 6 pm and 8 pm every restaurant is filled with people enjoying exactly that before heading out for a nice dinner. Also, bear in mind that Milan is actually the place where aperitivo was created. With that comes the knowledge of original rituals it brings. However, if you wish to have a good dinner, we recommend trying one of the Milanese specialities – saffron risotto or breaded veal cutlet.

Whether you already have your tickets or you are just thinking about possible destinations, do not forget to put Milan on your list. It is a city with a lot of history and beauty which will definitely leave speechless.

If you are searching for accommodation, we can also help you with that. Click here to find your best price for the hotel.