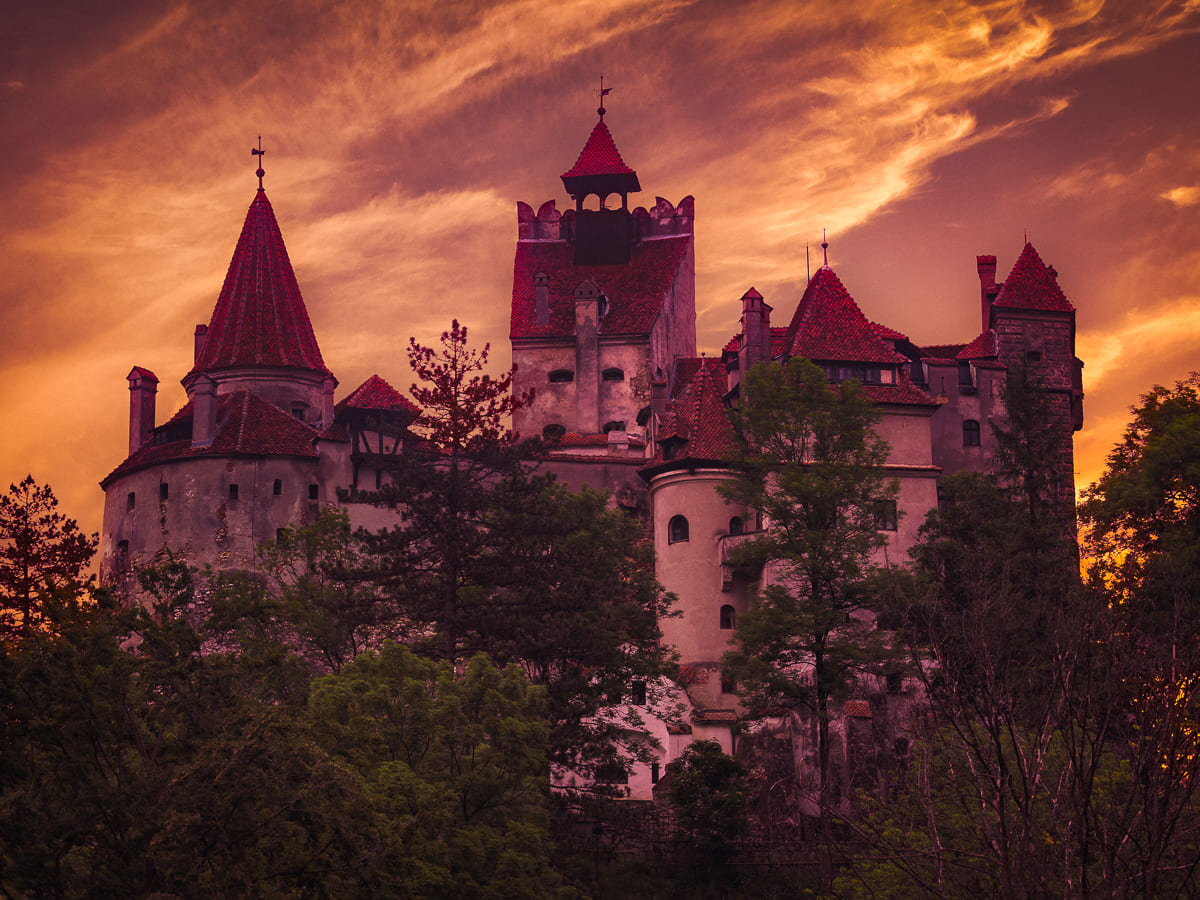 From haunted castles and cursed islands to ghoulish street celebrations and costume parties at Dracula’s castle, several places around the globe beckon many travellers in celebration of Halloween or just good scary fun.

This beautiful Bavarian Castle, according to legend, is said to be one of Germany’s most haunted castles. Dating back to the 1500s, reports of hauntings began. The story is that the owner discovered his wife was stepping out on him with another man and had her murdered. He and his two sons died shortly after his wife died. There are still reports today of sightings of a female ghost walking the hallways of the castle. Hourly trains leave Munich to Regensburg Hauptbahnhof, where a bus will take you to the castle.

Book your stay at the JOYN Munich Olympic.

Built between the 13th and late 15th century, legend has it that during a power struggle amongst the O’Carroll clan, one brother plunged a sword into his brother, a priest, who was holding mass in the castle’s chapel. The room was dubbed “The Bloody Chapel,” with the ghost of the priest reportedly haunting the church during the night. Centuries later, during castle renovations in the early 1900s, workmen found a secret dungeon in the Bloody Chapel with hundreds of human skeletons. Visit the ghoulish dungeon designed so that prisons would fall through a trap door, falling on spikes in the ground, puncturing their lungs and then dying a slow, horrific death.

One of the most haunted castles in Britain, Chillingham is claimed to be home to various hauntings. Disembodied voices of two men are often overheard talking in the castle’s chapel but can never be traced. The White Pantry Ghost was first spotted by a footman, who’d been locked into the pantry overnight to guard the family silver. He said the ghostly figure was begging for water, and it’s now thought she was a victim of poisoning. The castle holds special ghost tours throughout the year.

The Island of the Dolls, Mexico

When going through the beautiful canals of Xochimilcan near Mexico City, you may be (un)fortunate enough to come across the creepy Island of the Dolls, or in Spanish, La Isla de las Munecas, which looks like a place taken straight from a horror movie. Legend says that a young girl died on the island’s coast, and as a tribute to the girl, the island’s caretaker hung a doll on a tree. Over the years, more and more dolls were hung all over the island to leave it looking like it does today. If you are a horror movie fan, this might be worth visiting on Halloween.

This island near Venice is banned due to being the site of choice not only for the banished plague victims (twice apparently) but also for a 1920s lunatic asylum. It has to be haunted, right? A doctor at the mental hospital, who reportedly performed experimental and unsuccessful lobotomies most of the time, threw himself to his death from the hospital tower after claiming he had been driven mad by Poveglia’s ghosts. Perhaps it had more to do with the demons in his head, but it makes for a good, creepy story. Access to Poveglia is usually from Venice, which is easy to reach by train throughout Italy. There are no official ferries or transfers to the island, but you can charter a private boat to the island.

Book your stay at:

At first glance, Isola La Gaiola seems like a perfect example of the beauty and romance of southern Italy. The island is split in two, with a stone bridge joining them together. But it has a dark past. The island, known to be cursed, was home to many wealthy people. Some of whom committed suicide. Others died of heart attacks, while others had failed businesses or mysteriously died. Now, it is a National Park. The nearest city is Naples, where you can take a bus to the island.

If you want to celebrate Halloween and forgo the dark hauntings, this medieval city is famous for its Halloween celebrations and is great for family fun. Nearly 30,000 people attend the parade of ghosts, goblins and ghouls carrying candlelit pumpkins. Many tourists dress up in costume and tour the local bars, cafes and restaurants, many of which hold special Halloween parties. Take the train from Paris to see the fall colours. The journey takes approximately 3 hours.

The biggest European Halloween party in Northern Ireland, the city of Derry, the walled city comes alive with ancient spirits welcoming you to join their celebrations. Enjoy the folklore, feasting, and festivity as the city allows travellers to revisit Halloween of the past. The event contains more than 100 events in 40 venues across the city, with music, food, arts, and cultural and contemporary entertainment. Bring your costumes and feel what it’s like when 100,000 monsters gather in one place.

And Halloween wouldn’t be the same without partying with a vampire. Transylvania, according to legend, is where Dracula was born. Halloween cannot be any scarier than in Bran castle, Dracula’s abode! During the 15th century, Vlad the Impaler earned his name by striking fear into local residents after he held a banquet in which he had all of the guests savagely stabbed and then impaled on spikes and left to twitch until their untimely ends. This year you can enjoy the exhibit on the making of Bram Stoker’s Dracula until 12 November 2022.

Book your stay at: