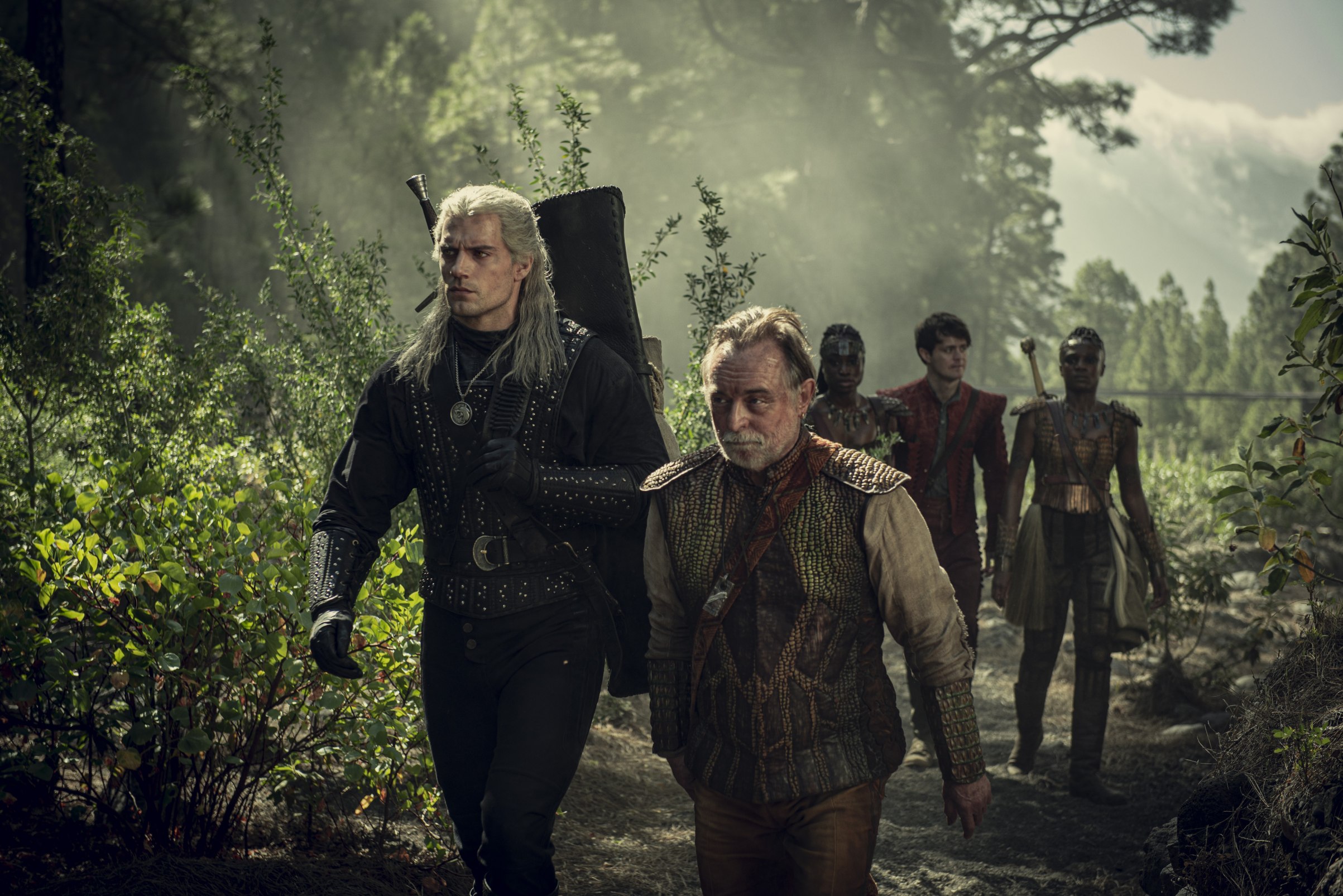 Toss your coins to visit these Witcher locations

The Witcher world springboards between Nilfgaard and Cintra, Temeria and Aretuza, Blaviken and back to Cintra all over again. The series bounces to witchcraft then to humanity as much as it does from richesse to poverty. One second, you’re at the gaping mouth of a dragon’s lair battling the dwarves while trying to protect the mother’s egg; the next, you’re being propelled high above two bite-sized islands, watching the rope bridge quiver over the rocking ocean.

The Witcher is a world full of fantasy, but on the other hand, reality too. Here’s a list of the tippity top 6 locations from the series, that you can totally visit (p.s be ready for spoilers): 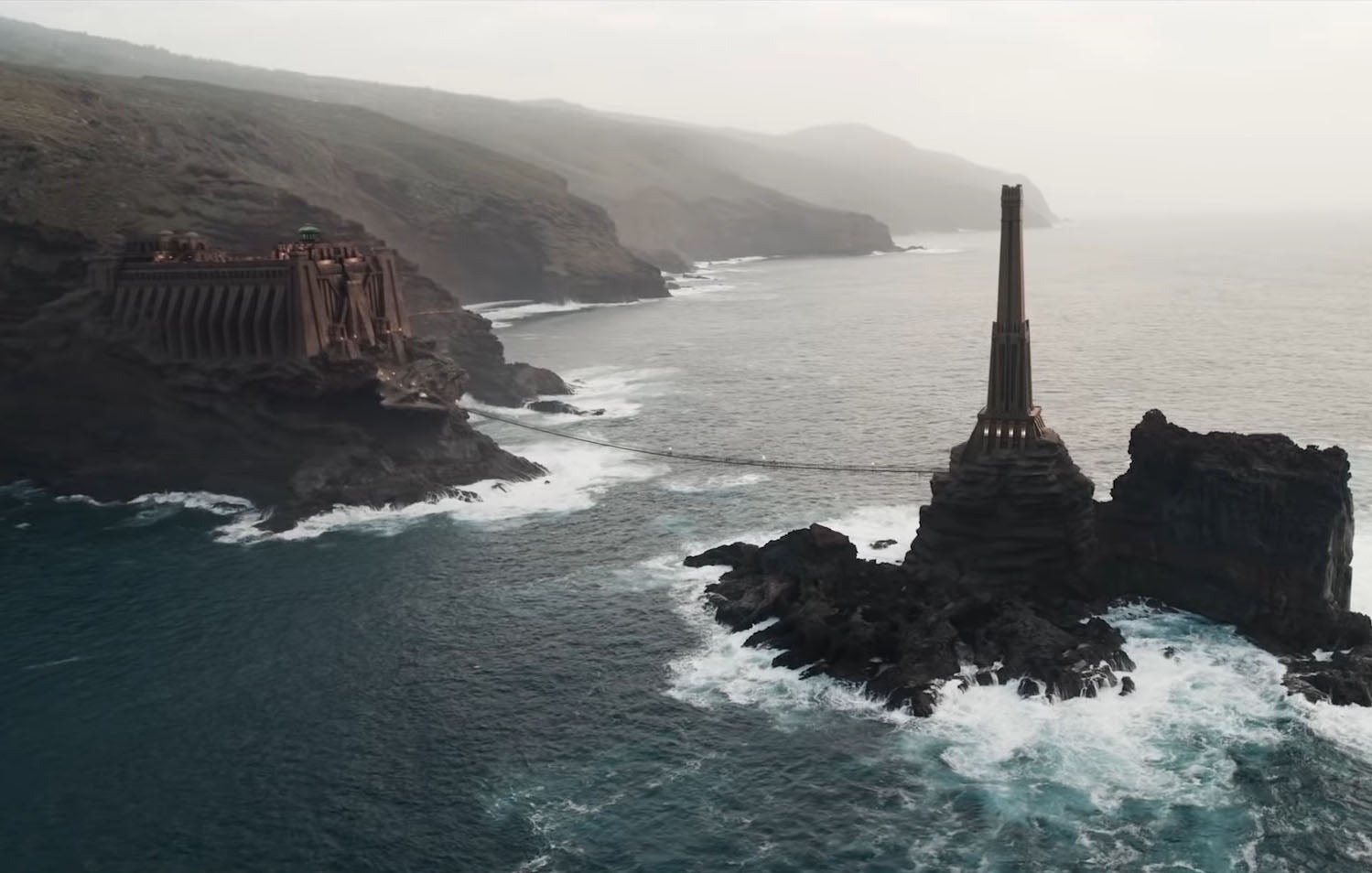 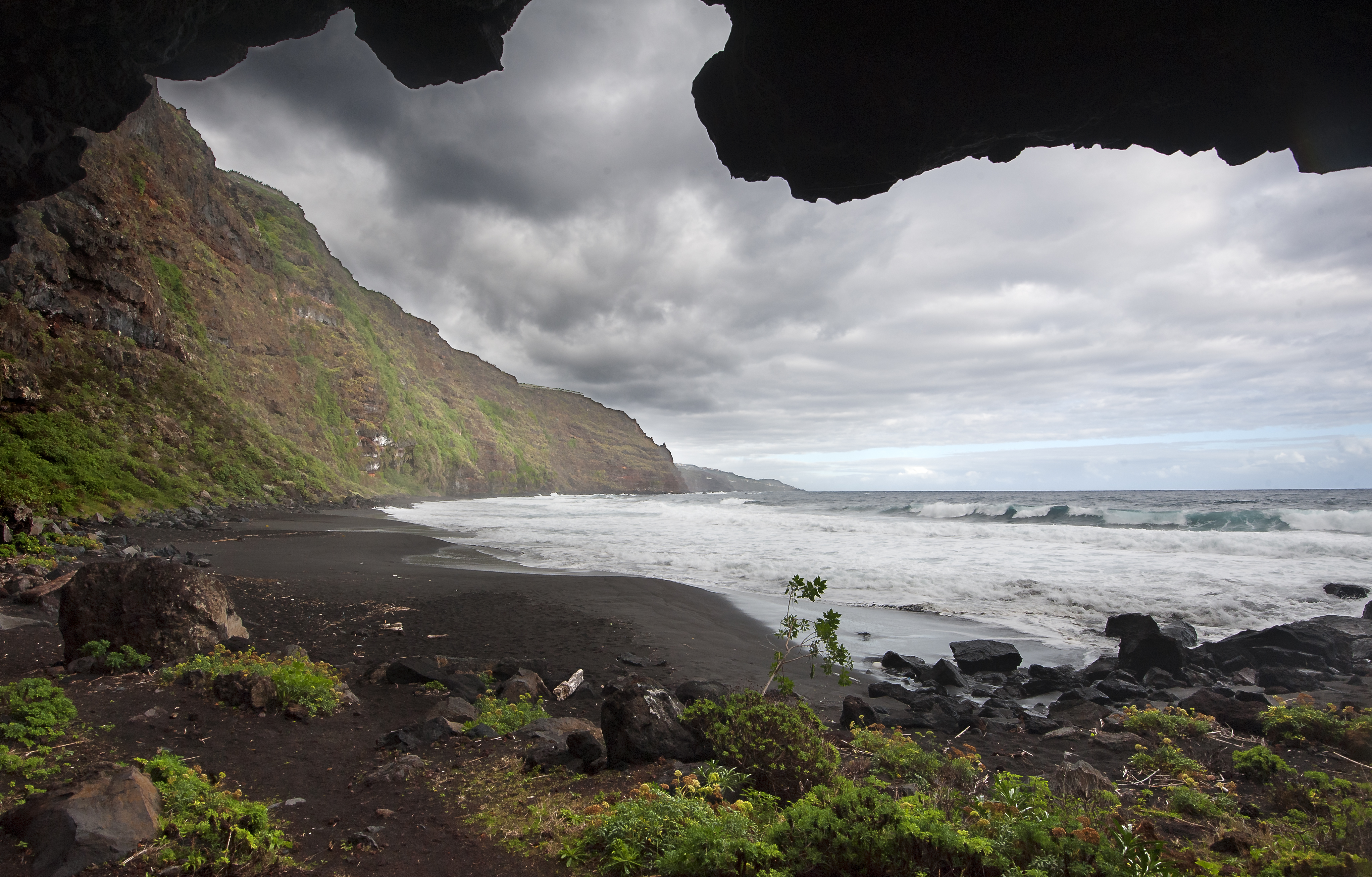 Bronze cliffs of La Palma. You can trek here, but you have to leave the house first. Image source: Julen Landa

The magic, the witchcraft, the sorcery crashes to your mind-shore and bewitches you from the moment you wash up on the coast of La Palma Island in episode 1. The show’s answer to a school of witchcraft and wizardry is all CGI and magic, but the Island isn’t just some studio spell trap. It really exists beyond the Tissaia De Vries hocus pocus, and it’s called Roque de Santo Domingo in Garafía.

La Palma island is equally inversely spellbinding. It’s got another side to it past the moody coast. The jungle is a soft, technicolor dreamland, showcased in the Brokilon Forest scenes, home of the Dryads. Discovered haphazardly by Ciri and Dara, we become as enchanted by the the majesty of the rainforest, exhibited by La Zarza (Garafia), Los Tilos Waterfall (Los Sauces) and in the Cubo de la Galga fern forest (Llano Molino). 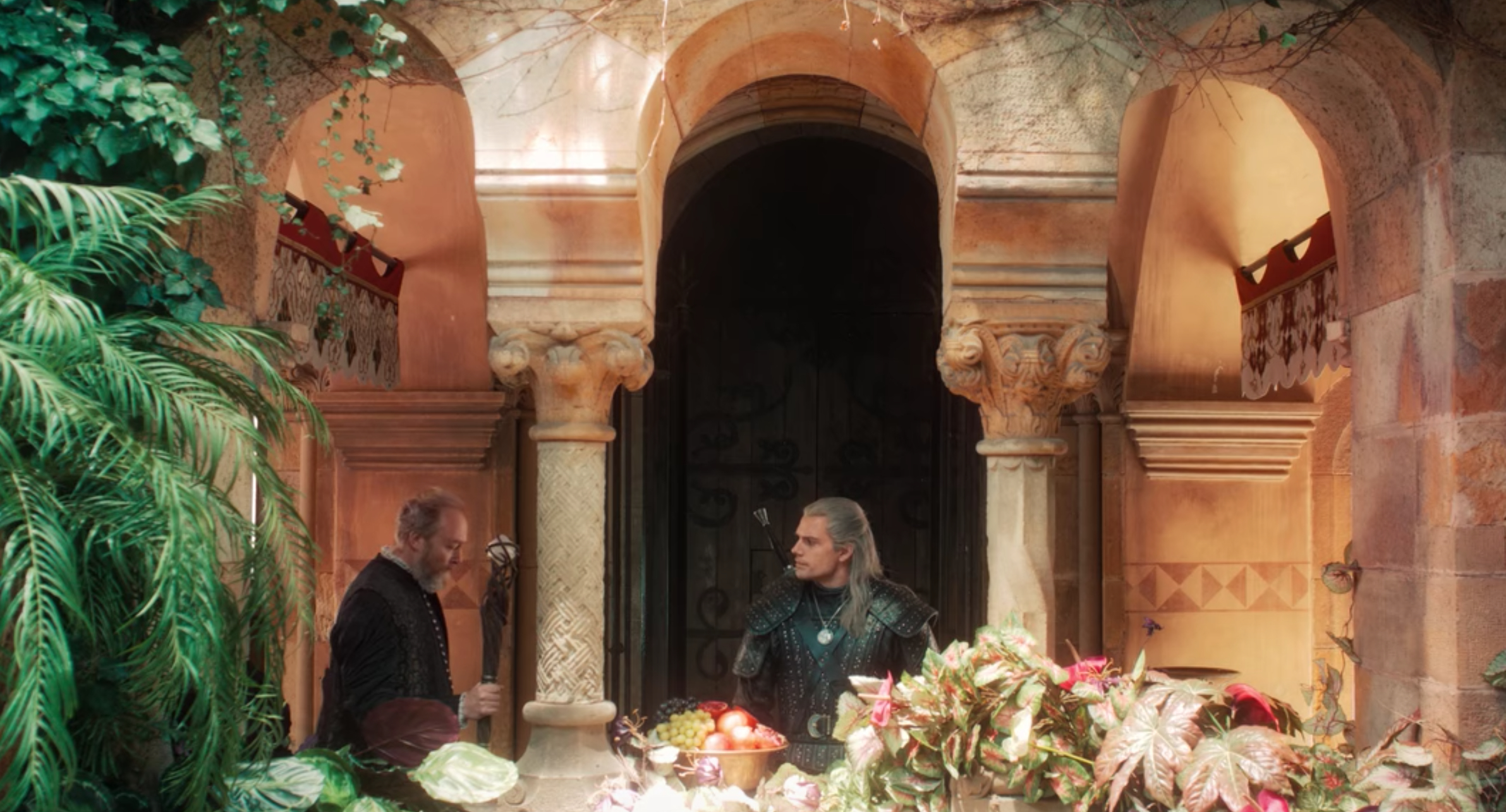 Geralt’s ego stare-down with the sneaky Stregobor. They didn’t even eat. Image source: Netflix / The Witcher S1E1: “The End’s Beginning” 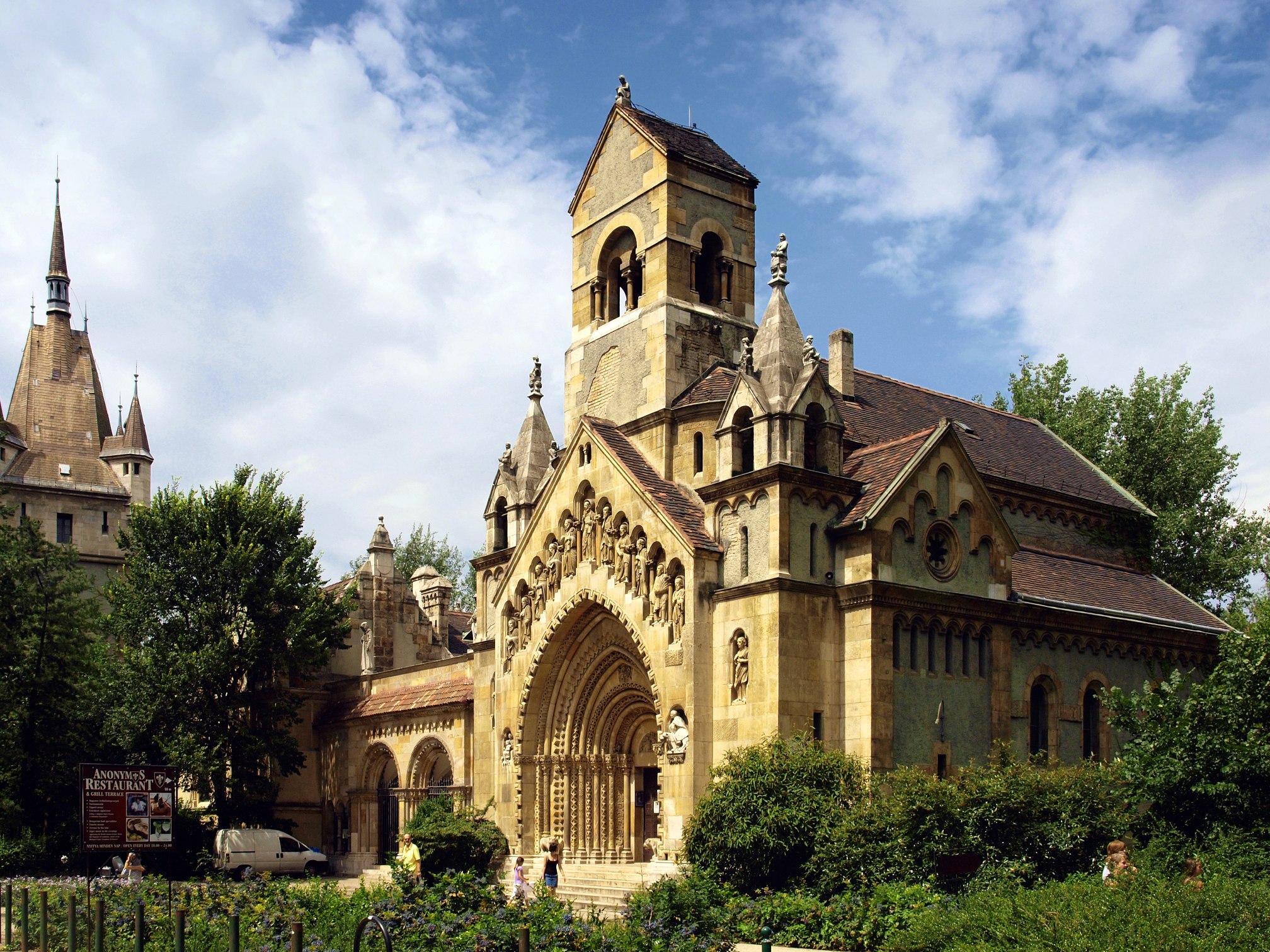 Remember that patio that’s like a living, breathing Sistine chapel esque work of art? Stregobor’s courtyard? The place with all the nymph fruit pickers? Its like Eden; apples trees, naked people, the talk of evil spirits that make women act crazy and the presence of a sneaky serpent *cough* Stregobor, you snake *cough*. Think of a Sorolla painting, but off canvas, there in front of you, animated.

This blossoming garden, located across from Vajdahunyad Castle, is where the Witcher finds out the wizard wants to kill Renfri, oh, and that Renfri is cursed. Oh, and that she wants to kill all humankind. Allegedly… it’s called Jáki kápolna cloister. 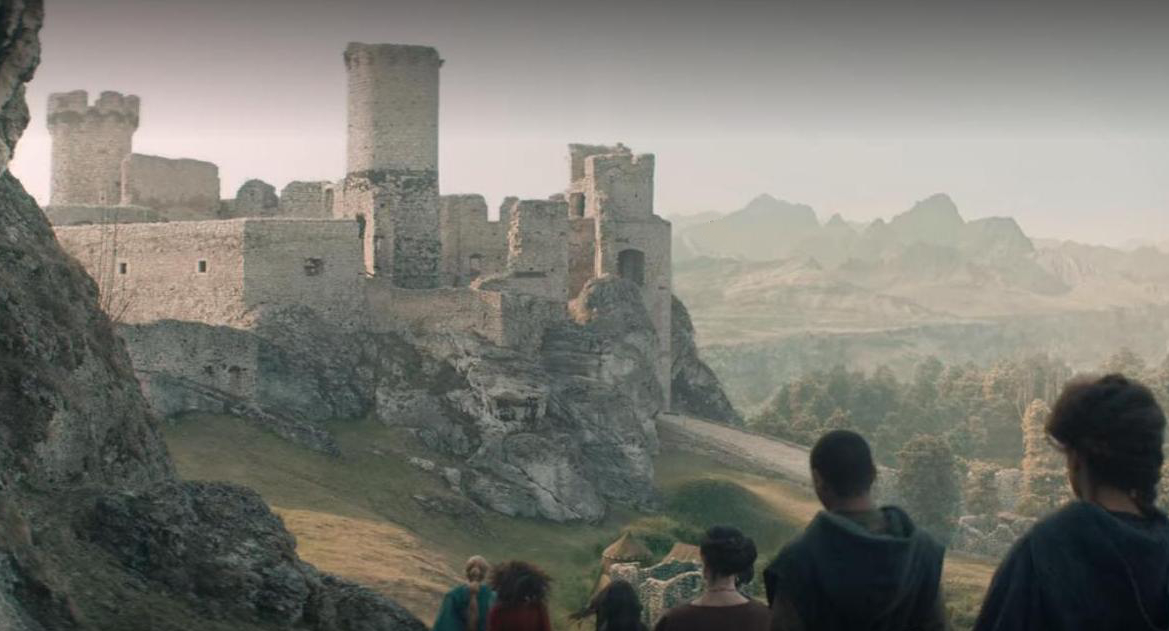 The castle grounds before the blaze. Image source: Netflix / The Witcher S1E8: “Much More” 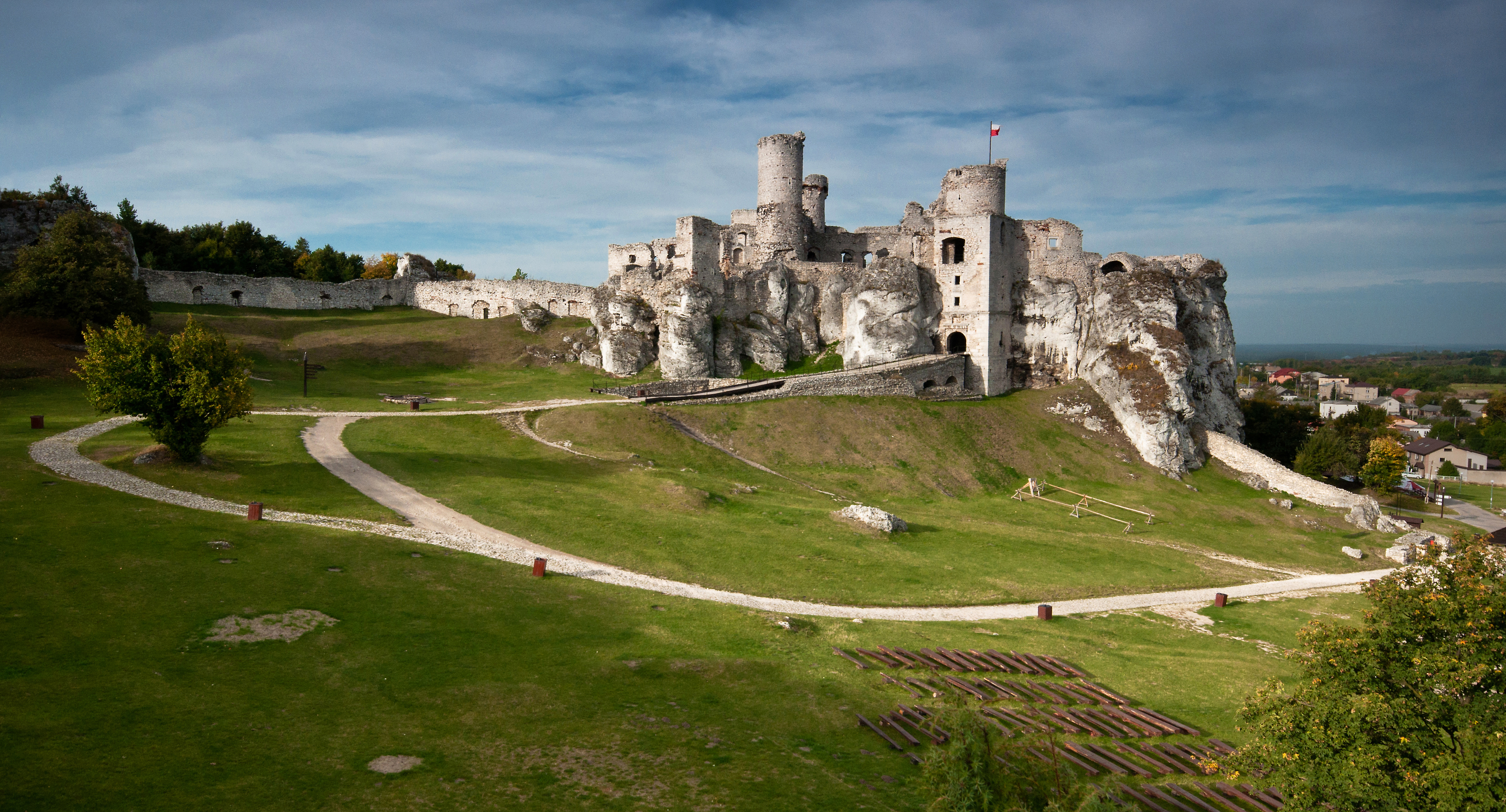 Ogrodzieniec’s nature charmed the producers enough for them not to introduce heavy CGI onto the structure. Image source: Wikipedia Commons

Of course, part of the series just had to be filmed on Polish ground to pay homage to the author of the books Andrzej Sapowski. So, naturally, since this is a fictional Medieval universe we’re talkin’ about, famous Polish ruins were taken full advantage of. The final battle of the series ‘the battle of Sodden’ takes place in a 14-15th century Polish castle in the final episode at Ogrodzieniec, just over an hour drive northwest of Kraków. 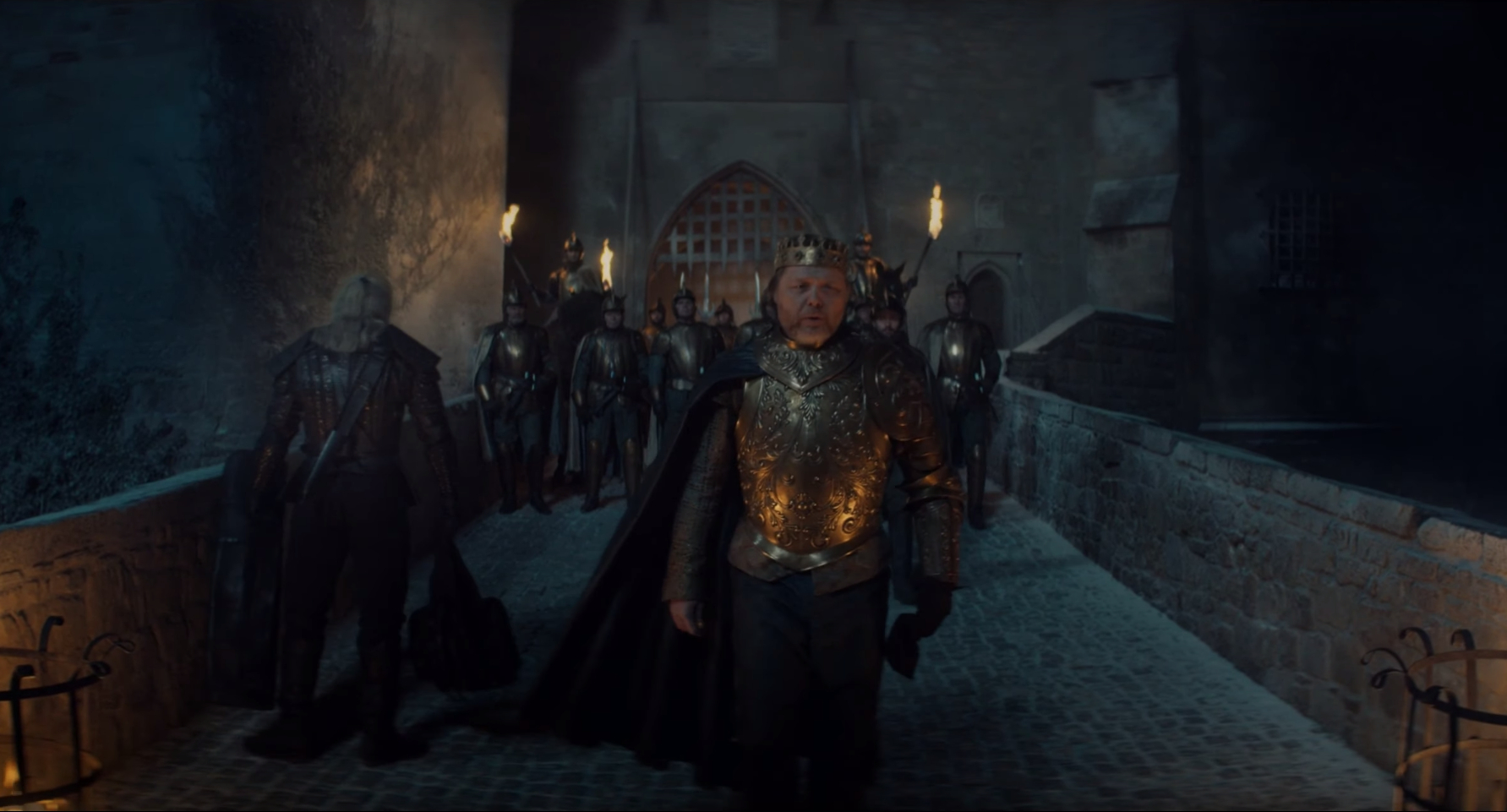 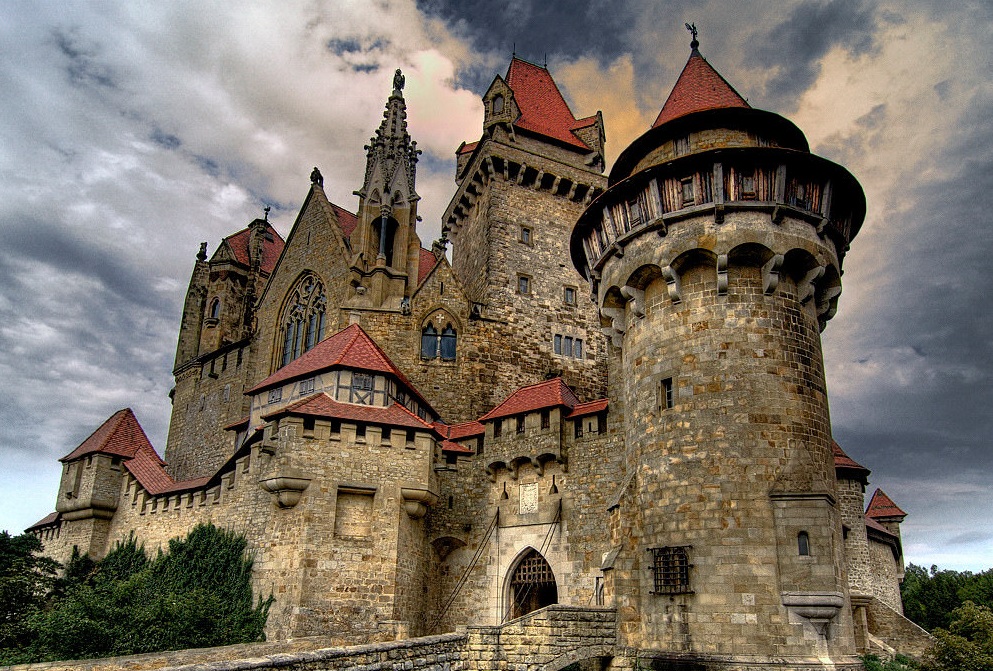 The castle was constructed from second-hand structures from all over Europe so that it looks “castly”. Image source: Redanian Intelligence

The Burg Kreuzenstein castle in Leobendorf is the site of a lot of major drama in episode 3. It’s where we find out about the butler guy who put a curse on King Foltest because he was in love with the King’s sister. It’s where Geralt of Rivia finds letters unveiling the incestuous relationship between Foltest and Adda. It’s where we find Sancia’s letters demanding Adda get rid of the baby that her two children “made”. So yeah, you could see it’s a pretty dramatic location and not just for its appearance.

If that doesn’t jog your memory, you’ll recall the abandoned castle in Temeria by the loco duel that went on there. The Witcher fights that overgrown, weird thing that won’t stop screaming, and we all realise -oh my god- it’s Adda’s baby… Special effects were used to achieve the dilapidated, gothic vibe of the castle though, it looks kinda different in real life. 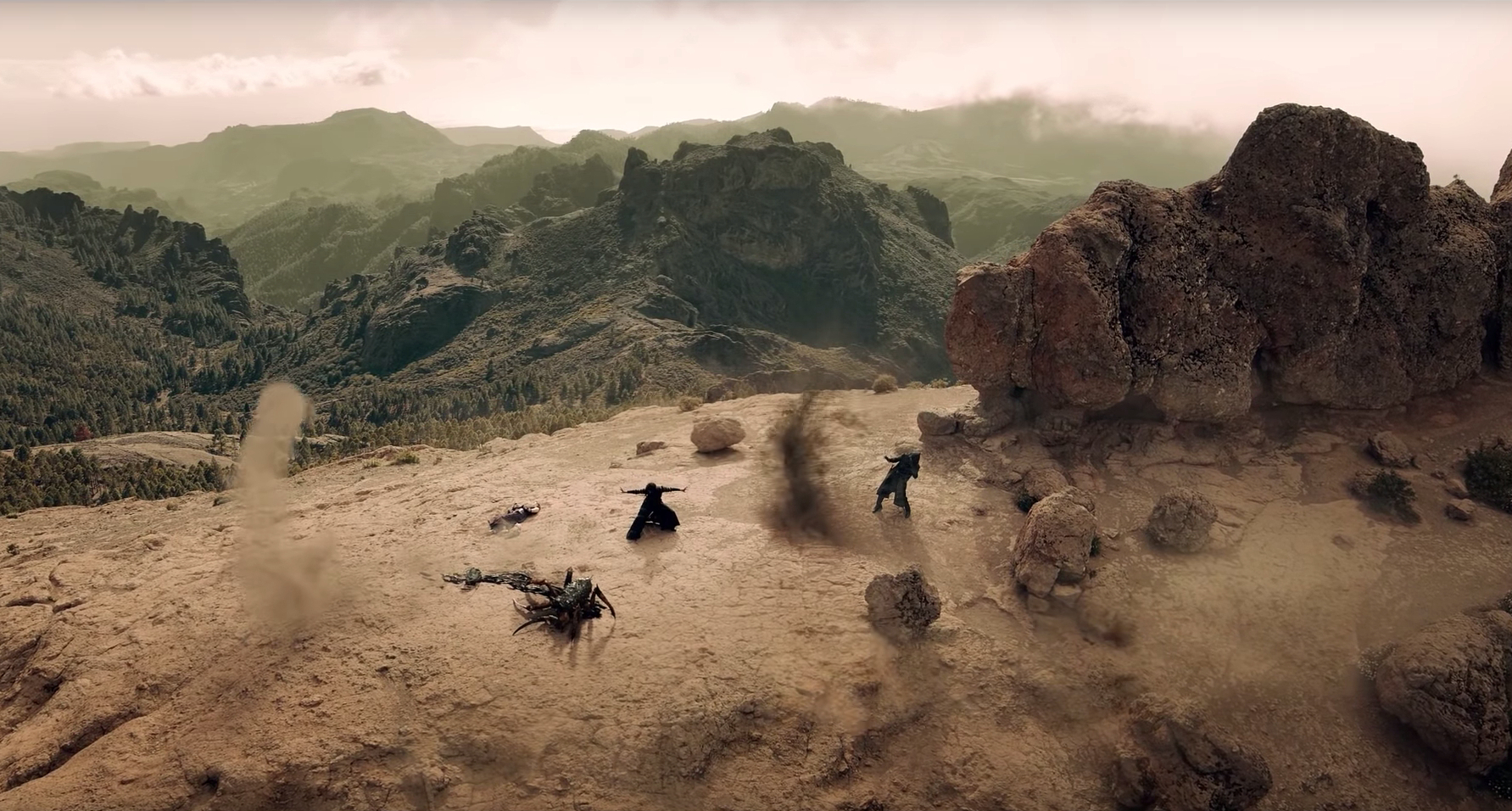 Before this encounter, I wasn’t sure that Yennefer learned any usable magic at Aretuza. Image source: Netflix / The Witcher S1E4: “Of Banquets, Bastards and Burials” 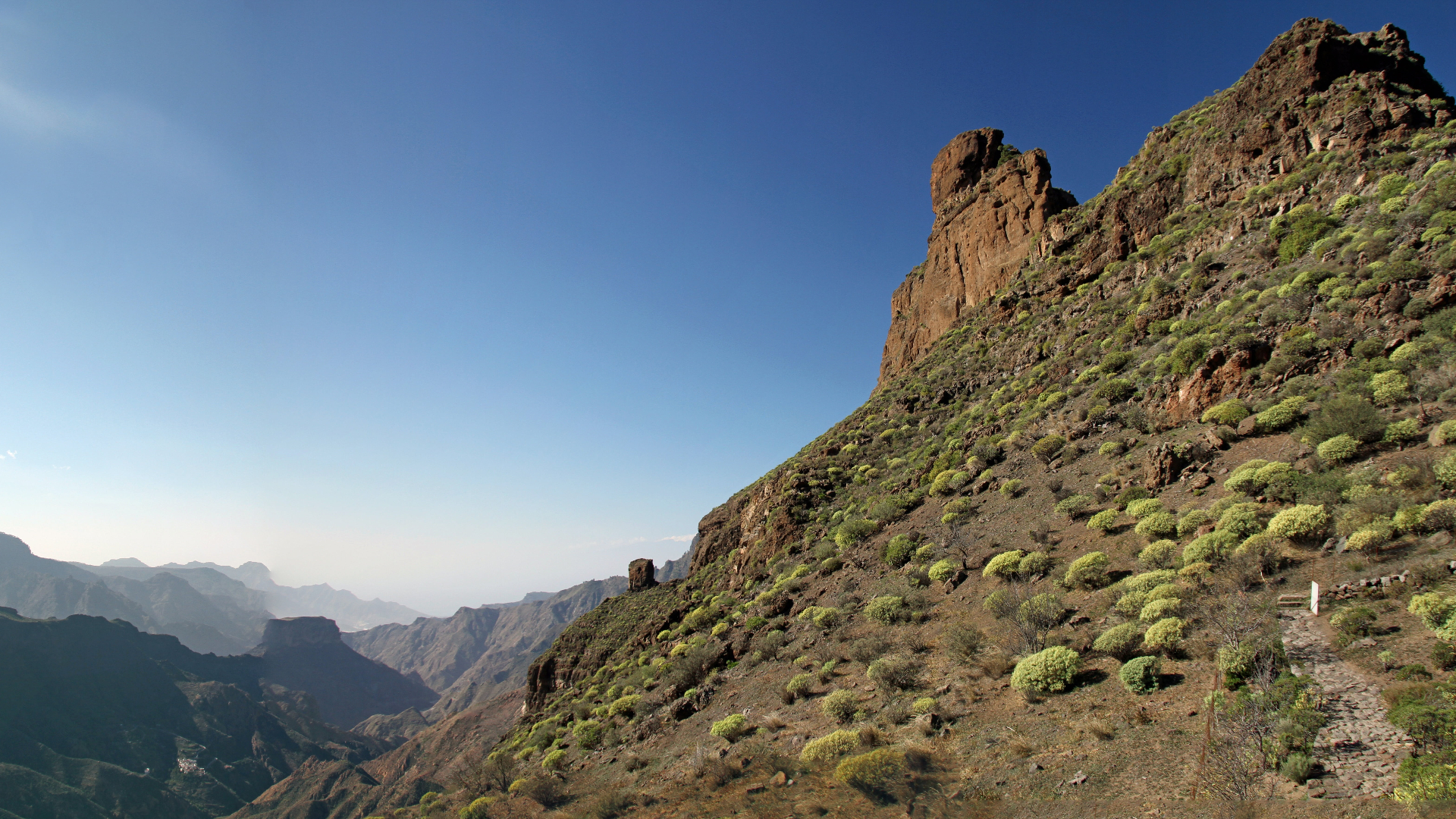 Merge the tropics with a rocky desert landscape – that’s what Gran Canaria can look like. But see that supermarket there? Image source: CC0

One the most iconic scene sequences from the series is when Yennefer is running with Queen Kalis of Lyria to protect her from assassins (that man in black plus the scariest spider-bot alien you’ve ever seen). The streak of portals that Yennefer, the ‘useless witch’, opens were shot all over Gran Canaria island. It’s like a burst of rocky, dirt mountain peaks like Roque Nublo, to desert dunes at Maspalomas beach, to fields of gentle, yellow flowers and sparse trees in a small village close to Tejeda and finally, we land with a plonk on the beach of Guayedra in Agaete. Juxtaposing as it all is, at least we, unlike the baby princess, arrive there alive… In any case, these scenes really showcase the allure of the Island. 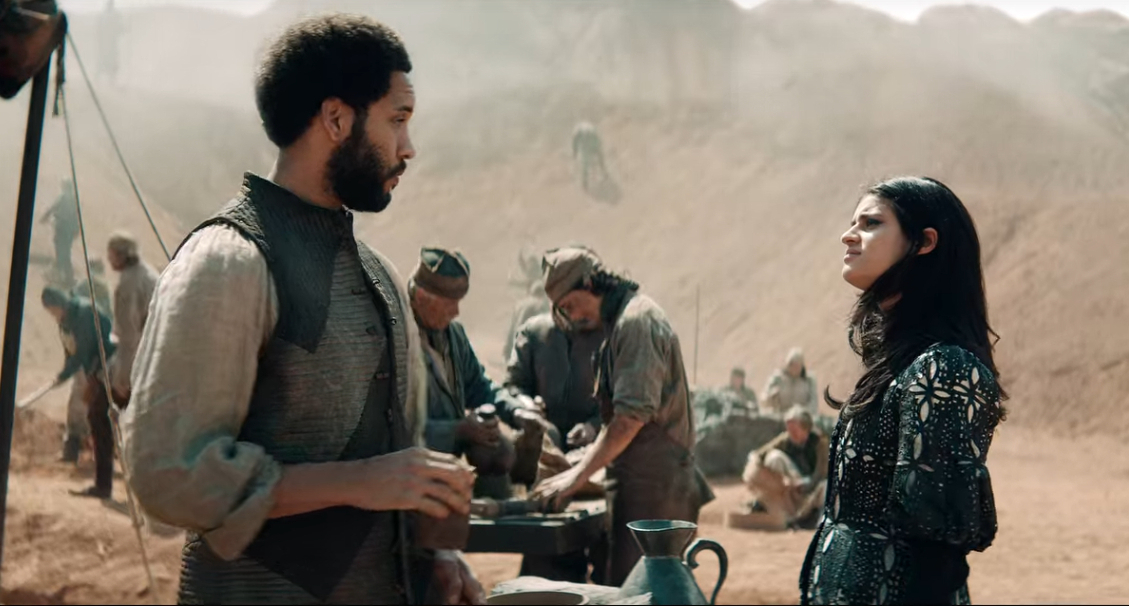 Down at the dig, Istredd ad-blocks Yennefer and she can’t believe it. Image source: Netflix / The Witcher S1E7: “Before a Fall” 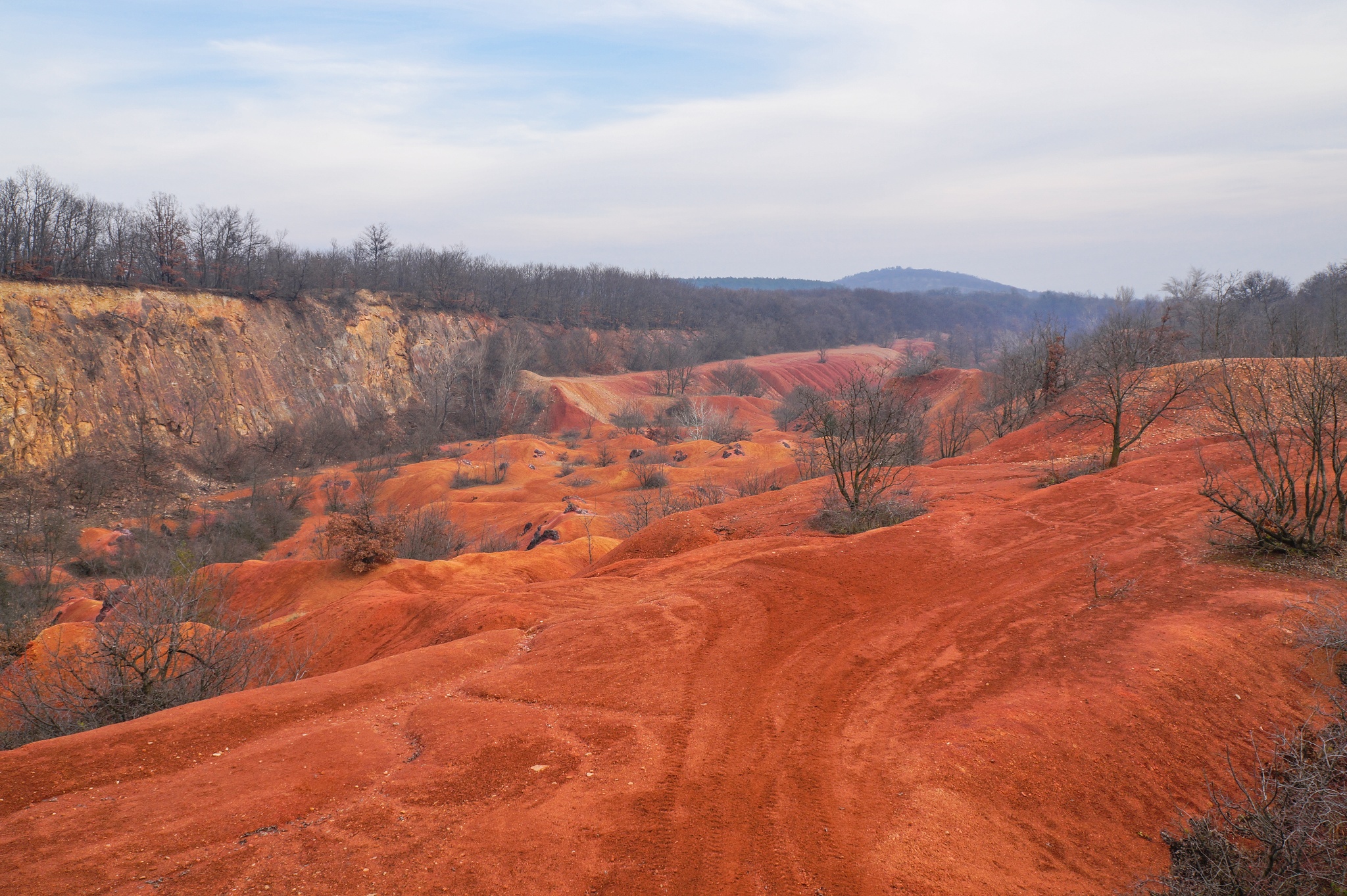 Yennefer visits the Bauxite Mining Geological Park which is located IRL in Gant, Hungary, but in Witcherland it is the site of an archaeological dig in Nilfgaard. It’s like planet earth’s interpretation of Mars. The bauxite rock gives it this red hot, devil’s hideout kind of vibe. You would totally visit this site, if you’re into rocks and science and stuff. Or if you’re just into the idea of seeing the spot where Yennefer rides up on her house to cross into Nazair and encounters Istredd again and it’s all sexual tension, cups of dirt and memory.

So there you have it. The best The Witcher locations that you can visit and live out your witch or wizard fantasy, like in real life, not just on screen with Geralt, Borch and the gang. However, if you haven’t got the time or money for all of that, or you’re afraid to go there in person for fear of being sucked up by a portal then brought to a cave and getting seduced by a geologist who tells the Brotherhood that you’re part elf, then Netflix have created an interactive map of the Kingdoms just for you. Click here to do some cyber-meets-fantasy travel.

Visit Atlas of Wonders to discover other filming locations from popular movies & series.

One thought on “Toss your coins to visit these Witcher locations”